The Vrije Universiteit Brussel's Department of Computer Science is housed on the tenth floor of the university's F and G buildings. Though they may once have been admired as striking examples of brutalist architecture, most people nowadays have a less positive attitude towards these enormous structures of poured concrete. Nonetheless, our offices enjoy a spectacular view of Brussels, as evidenced by the pictures below. The left picture shows, among others and from left to right, the South Tower, the Palace of Justice, the Basilica of the Sacred Heart, the European Parliament, and Brussels's business district. The right picture shows, among others, Brussels's business district, the Atomium ©, the Berlaymont (which houses the European Commission), the Cinquantenaire, and the VRT Tower. 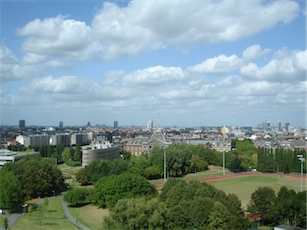 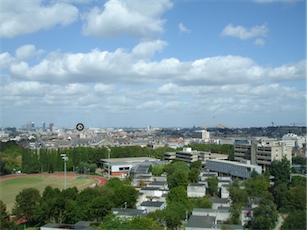